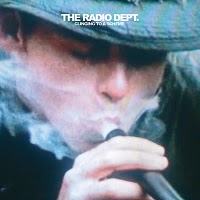 This one's not going to take long.


Though a hair better overall, my sense of Clinging to a Scheme, the latest release from Swedish shoegaze outfit The Radio Dept., is near identical to my impressions of Broken Bell's debut (minus the Dangermouse digs) - gorgeous, compelling sound, solid bookends...and far too many meandering tracks scattered about the album's middle.

The highlight, without question, is the one-two-three opening run of the gentle Domestic Scene

.  Up to this point, one really feels the band is onto something.  But after that, though still very pretty in feel (leading to the album's above average intangibles score), things really trough out.

There hasn't been nearly as many C86/shoegaze/dream pop-styled releases this year, so if this is your genre and you need a fix, definitely give Clinging To A Scheme a try.


But for most, I just don't think it's a strong enough front-to-back effort to warrant a full purchase, and with such obvious standout tracks, I'd suggest cherry picking Heaven's On Fire

and one or two other songs and calling it a day.