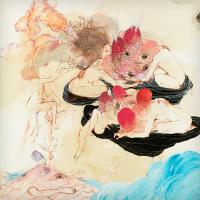 Take the Modern English track I'll Melt With You, with its flowing synths and awesome rock bottom bass, then turn the mood from romantic to bitter, and let Tom Waits at his most hystrionic take over the vocals.
That tells you everything you need to know about the sound and feel of North Carolina-based Future Islands's searing break-up album In Evening Air.
Rightfully, most discussions of this album have focused on frontman Sameul T. Herring's deep, gravelly, highly idiosyncratic voice.  It's a unusual front for this kind of 80s flavored synth-rock, and will be a deal breaker for some, but I found it fascinating.  Even in the album's softest moments, it infuses these disintegrating relationship explorations with a palpable emotional intensity.
Over nine consistent, swirling tracks, he rants, he cajoles, he begs, he regrets...and I loved being along for the ride every step of the way.  At times it feels the underlying song/melodic structures don't quite match the potential of this sound/voice combination, but that's my only quibble.
Other than that, there's really not much to say about In Evening Air.
It's just a passionate collection of good songs consistently elevated close to greatness by the Herring's vocals and the band's engaging core sound.
Status: Solid Recommend (almost a strong).
Cherry Picker's Best Bets: Walking Through That Door


What are your thoughts on Future Islands's In Evening Air?  Let us know in the comments section below.
Posted by McQ at 8:00 AM