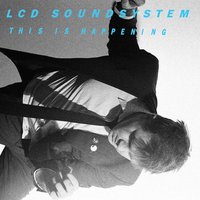 Well, if this truly is LCD Soundsystem's last studio album, as both the band's creative mastermind James Murphy and the album's own CD text attest, then all I can say is...what a great way to go out.

, one of the definitive albums of the 'Aughts, but it is damn close, and what it may lack in sheer iconicness, it more than makes up for with some pricklier but way-cool instrumental touches, an even sharper sense of humor, and a stunningly self-assured sense of pace and progression.

Seriously folks, despite being composed almost entirely of six-minute-plus songs, this one really moves.  It might be the shortest feeling hour-long album I have ever heard.

As for the actual songs, with one major and one minor quibble, they're another fabulously consistent batch, hitting many of the same dance-rock sweet spots as cuts on the previous albums.  Drunk Girls

, a synth and lyrical reworking of The Velvet Underground's White Light, White Heat

, claims the album's high-energy, high-laughs Daft Punk Is Playing At My House

spot, I Can Change

the Us Vs. Them

extended ass-shakers, and so on and so on.

As always, the spectre of past influences is omnipresent and a big part of the fun.  All I Want

would feel right at home on The Talking Heads Little Creatures

.  But no matter how blatant the thievery, one of Murphy's greatest strengths has always been his ability to create familiarity by clearly referencing works of the past, but still somehow make it his own, and he remains up to the task here.

I really only have two complaints with this album, the whiny lyrics to the otherwise excellent You Wanted A Hit

(I'll accept a song from Nirvana or Captain Beefheart complaining about record company interference...but from a band as fundamentally accessible as LCD...even if anchored in actual experience, I just don't buy it), and the intentionally hard-to-like track Somebody's Calling Me

, which unfortunately, succeeds a little too well.

But otherwise, this is just a fantastic, wonderfully confident and sure-of-itself album.  You've got to like analog synths and extended tracks to enjoy it, but if you can cross those two low hurdles, prepare yourself for sixty minutes of nearly unmitigated dance-rock bliss.

- 10
Intangibles - High
To Listen, Download, or Buy a Vinyl or CD Hardcopy,
Click On The Widget Below.
﻿What were your impressions of This Is Happening? Let readers know in the comments section below.
Posted by McQ at 7:40 AM