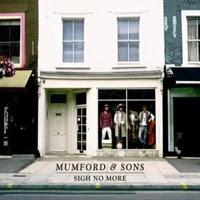 Straddling the line between indie and mainstream, heartfelt, traditional folk and arena-rock bombast, few releases were as critically divisive in 2010 as Mumford & Sons' lively roots-rock debut Sigh No More.
Hipster sites like Pitchfork despised it for what they saw as a crass, calculated faux-earnestness (i.e. straightforward, crowd pleasing nature), other reviewers praised it for its energy, spirit, and appealing group harmonies, and rated it among their ten best albums of the year.
I fall right in the middle.
I think there's a significant difference between blatant, calculated commercialism and naturally possessing populist-leaning creative instincts, and for now at least, I'm willing to assume the band is just a bunch of young folk music enthusiasts driven by the latter.
But the album does seem to offer up moments to support either argument in about equal measure.
Ironically, though, it's when the band is at their fastest, hardest-charging and most bombastic...when the banjo starts flying and the vocals start crescendoing, when they really go for those arena-rock sized highs and lay themselves most vulnerable to those Pitchfork-styled criticisms...that they are at their best.
The epic peaks to tracks like The Cave, Little Lion Man, and Awake My Soul are leagues better than the genuinely ham-fisted slower numbers of the album's weaker back half.
But in the end, whatever the motiviations behind it, I like this album.  It's got a very satisfying three song open, the melodies are warm and fairly solid throughout, and it's just a plain easy listen that a wide range of people will enjoy.
It won't change your world (except for maybe that of a few pining fifteen-year-old girls), but sorry Pitchfork, there are many other albums (not to mention some recent live headlining performances by Animal Collective, nudge, nudge) far more worthy of a 2.1.
Status: Solid Recommend.
Cherry Picker's Best Bets: The Cave

What are your thoughts on Mumford & Sons Sigh No More? Let readers know.
Posted by McQ at 8:00 AM