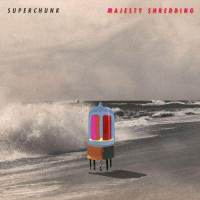 Following a nine year recording "hiatus" that saw bandmates Mac McCaughan and Laura Ballance forge Merge Records into a powerhouse indie label housing the likes of Spoon, The Mountain Goats, Bonnie "Prince" Billy, The Love Language, and Arcade Fire, Superchunk picks things up right where they left off, delivering possibly the finest, albeit possibly the only, genuine power-punk album of 2010.
The verses get clunky occasionally, but the epic choruses, fueled by waves of dissonant 90s-tinged guitars, McCaughan's memorable, helium-voiced, almost Ted Leo-ish vocals, and Jon Wurster's massive drums, are fantastic throughout, most rating a point or two higher than the overall scores I've listed for each song below.
And when the band manages to max out everything at once, as they do on say Crossed Wires or, well, Everything At Once, the results rate with the best pop tracks of 2010.
So if you're looking for a return to the punk-pop sounds of the 90s, still executed with tremendous passion and skill, look no further than Superchunk's Majesty Shredding.
Status: Solid Recommend.
Cherry Picker's Best Bets: Digging For Something

What are your thoughts on Superchunk's Majesty Shredding? Let readers know.
Posted by McQ at 8:00 AM